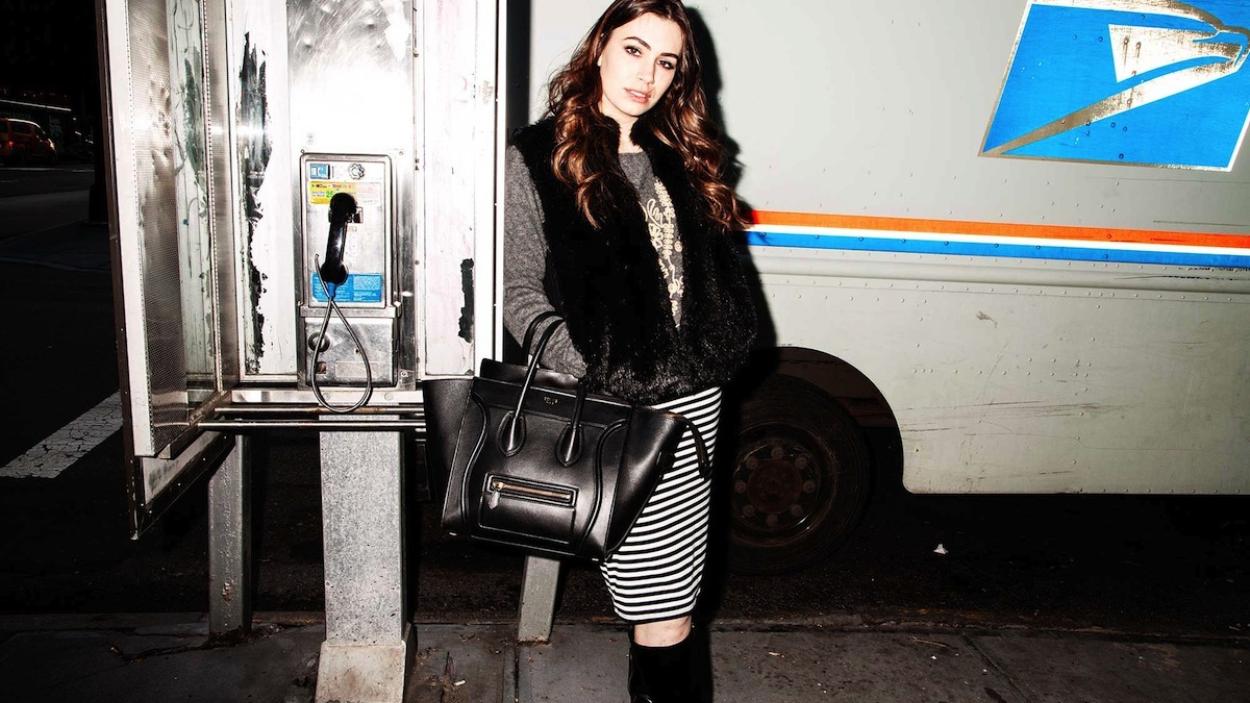 Over cake and tea on the Upper East Side, Gene Simmons daughter tells us about her shelter for abused kids, clothing line for plus-sized women, and how her controversial father taught her how to be a (literal) boss.

Rock stars’ kids get a bad rap. At worst, they die of a drug overdose, and at best they make racist comments on The View. But one rock n’ roll child is defying all the stereotypes–Sophie Simmons, the daughter of Kiss co-lead singer Gene Simmons.

The public knows Sophie from her dad’s reality show, Gene Simmons Family Jewels, but over the past five years, the 23-year-old has launched several charities and businesses. With her mother, supermodel Shannon Tweed, Sophie has opened a child development center for sexually abused kids called Sophie’s Place.

“I feel like a lot of the older generation experienced some sort of child abuse or sexual abuse when they were younger and they didn’t realize what it was,” Sophie explains. “That’s why there are so many abusive husbands and people with these issues.”

Creating an intersection between feminism and commerce, Sophie has also started a plus-size and regular-size fashion line with TheStyleClub and designed a jewelry line for Diamondere. This summer, she filmed an upcoming TV movie called Country Crush (she plays the villain), and later this year, she plans to release an EP–without the help of a major record label because she rejected the companies’ mandatory 360 deals. She has purposefully “laid her eggs in many baskets.” After studying coding at Pomona College, she dropped out, although she had finished all her credits, to start her own businesses.

“I really look up to people like Oprah or Martha Stewart, or even Arianna Huffington. They may have started as a TV personality or as a home decor personality, but then they branched out into all these different things,” she says. “Who knew Oprah would have a chai [tea at Starbucks]?”

When we meet at a hotel on the Upper East Side in February, Sophie looks like a girl who would drink Oprah Chai Tea. She wears a grey crop top, a black faux fur vest, and knee-length black boots. Although she says she works every day of the week, she looks well rested, with smooth skin and shiny hair.

But from the second she opens her mouth, I know she’s not your typical daughter of Beverly Hills. Whereas most celebrities only speak in pre-written soundbites, at the start of our conversation, Sophie bluntly tells me about her personal and professional lives. When I ask her if personal experience inspires plus-size line, Sophie says, “I was such a chubby child! Let me just list this off for you: I was a chubby child; I had a lisp, and I had those highlights in the front like Ginger Spice because I thought that was cool.” She tells me about how she felt insecure because her supermodel mother was a six-foot-tall Amazon with a six-pack, where she is 5’8.

“Growing up on [reality] TV, [insecurities are] on display for the world to see. Every velour sweat suit, every high-heeled sneaker–it was all there,” Sophie says. “But I think it really gave me a thick skin because I was up for debate at a young age, and I kind of just learned to deal with it.”

Sophie has publicly identified as a feminist. She refuses to let magazines airbrush her photos, and earlier this year, she told Yahoo Style that girls who reject feminism are “wrong.”

After discussing feminism and confessing her insecurities, Sophie again goes where few celebrities would go and tells me her dress size (an eight). She also tells me no publicists will be joining us on our day together: “I never, ever bring PR to my interviews because I feel like it’s so weird.. it’s not organic. It’s weird.” 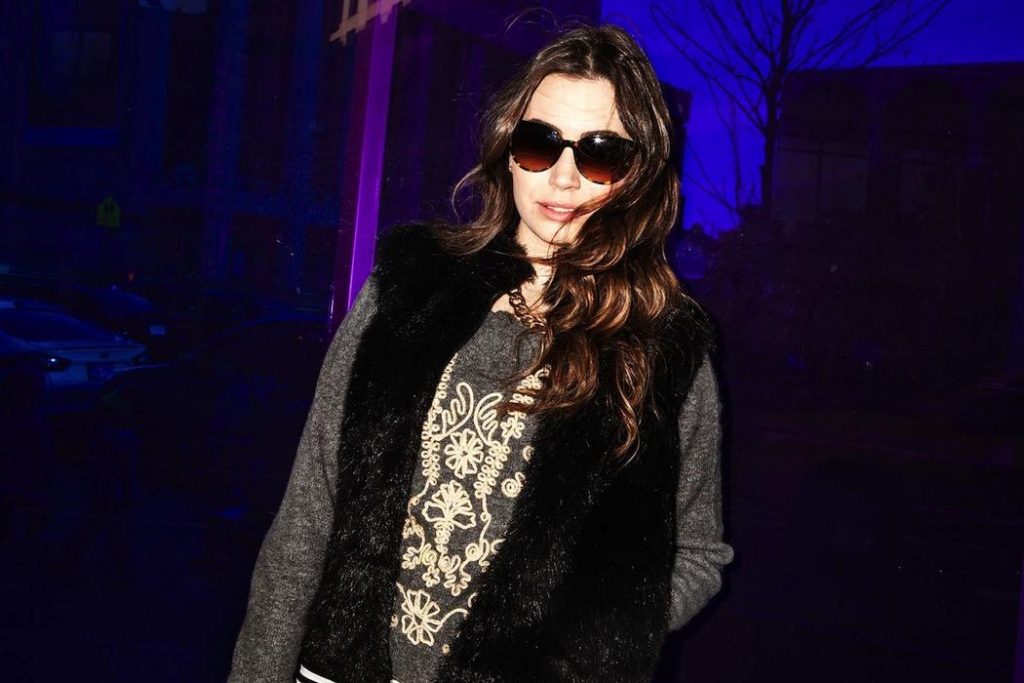 Sophie’s confidence and candidness as a businesswoman seems shocking, considering her father’s reputation. Feminists have criticized Gene Simmons’ remarks about women on Fox News. Last year, he ranted about women who refused to let men open doors for them: “If opening the door means you get special treatment, we want to treat you special,” he said. “If you were a princess, EVERYBODY would open doors for you!” However, Sophie credits her business acumen to her father: Growing up, Gene instructed his daughter to sit in his office as he closed deals. (Gene only employees a lawyer, finding managers, agents, and even assistants useless.) As an adult, Sophie texts Gene to get his opinion before she signs contracts.

“With all due respect, growing up and learning how to cook a spinach soufflé is not gonna prepare you for life unless you’re going to become Martha Stewart,” Gene says. “The great thing about Sophie is she’s as feminine as feminine can be, but she’s more man than any man that I’ve ever met in terms of negotiating prowess. She understands the concepts, the structure.”

Gene’s school of life has made Sophie more realistic than the millennial crop of Ivy League business graduates who think their start-ups deserve million dollar evaluations, although they lack any income.

“I think people are getting money thrown at them for ideas that may not be worthy of it,” she says. “There are a lot of young people who have fantastic ideas. I get it, it’s great. But it’s not a two million dollar idea, and you shouldn’t be given two million dollars to just run with.”

In Beverly Hills, Gene and Shannon managed to raise Sophie in a realistic and blunt environment. Sophie says her parents never gave her unwarranted compliments. Once, she sang at a school talent show. She missed a few notes. Afterwards, she asked her mother how she had done. “You were off-key, but you looked pretty,” Shannon said.

Sophie learned her fashion sense from her mother. Although Gene rocks at selling concert tickets, he sucks at dressing himself. Sophie and Shannon buy Gene’s clothes for him, and for 30 years, Gene wore the same pleather pants. “It took us, like, forever to get him to not wear pleather pants because they’re not age appropriate and they have like a lace-up crotch,” Sophie says. “Now he’s in jeans, which is like a huge step forward.” But Sophie isn’t opposed to pleather in general: She has included it in her clothing lines, preferring fake leather to animal-based fabrics. 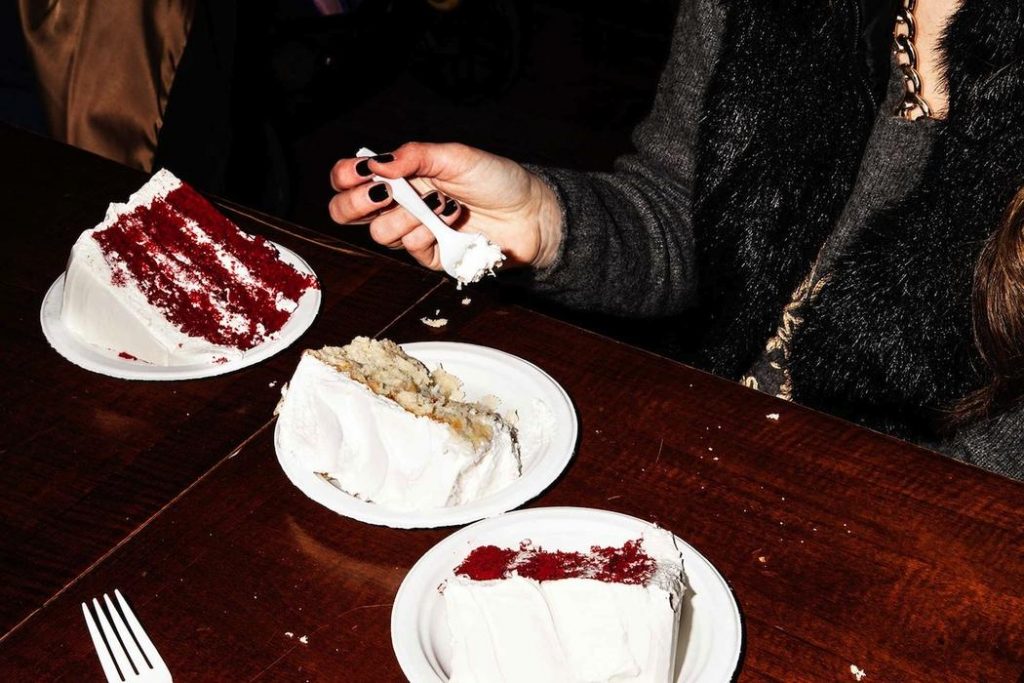 Between the pleather and contract negotiations, Sophie grew up in a strange rock n’ roll world unlike most of suburban American. Her parents gave her jobs, money, and material possessions–all the velour a teenage girl in the 2000s could want. What makes you most happy? I ask. She says, “Cake,” like a normal person.

“Caramel brulee lattes from Starbucks come around once a year but when they do I’m like the happiest I’ve ever been,” she says. “Christmas makes me really happy even though I’m not religious. I just like presents.”

Against standard publicists’ advice, she invites me to get cake with her at Magnolia Bakery and even allows us to photograph her eating. But Sophie isn’t basic. She’s weird–in a good way–and despises girls who post Marilyn Monroe quotes on Instagram. She says, “[They say Monroe said] ‘class is a turn-on.’ I’m like, that’s not [true]. She never said that. Maybe she did behind closed doors but it’s never been documented.”

“I don’t think being basic is bad,” Sophie explains. “I think #Inadequate is worse…. Most of the world is basic humans with basic jobs, and they do the best they can.”

But is it better to cater to basic bitches as a businesswoman? I ask.

“Absolutely,” she says. “It’s a broader market. If we’re calling the general public basic–in a good way cause I don’t think it’s a bad word–it’s another term for normal.”

Despite being born into fame, Sophie has experienced rather basic life events. Over cake, she tells me college sex stories no different than my own teenage sex stories. (Since we met in February, she has started dating a screenwriter). She has fun like any girl in her 20s, but she stays away from hard partying. Since early childhood, she has known her father would disinherit her if she abused drugs. In the 1990s, Gene sat Sophie and her brother, Nick, down for a “heart to heart.” According to Sophie, her father brought a large apple into her room and placed it on a table. When your mind is not on drugs, Gene said according to Sophie, “You have a full apple. You’re able to do anything with it. You can save it, you can eat it, you can share it, you can do all these things with your apple. But if you’re on drugs…” He then lifted his hand and smashed the apple into pieces.

“The apple went everywhere. It sprayed on my face,” Sophie says. “I [was] sitting on my bunk bed almost in tears because it was so terrifying. But he really had a point–[doing drugs] will ruin your life.”

Gene also says he told her, “If I ever catch you high or drunk, at least without talking to me about it first, you will find your Beverly Hills privileged asses in a work camp in the middle of an Arizona desert, and I will disinherit you.” Gene declared the family’s drug policy based on his years touring with rock musicians and watching celebrities’ children struggle with drug addiction. “The reason kids of celebrities get high and have to go to rehab is because they’re allowed to,” Gene says. “Rockers are idiots. So are rappers. So is the whole entertainment field–just as a statement of fact.”

“There is an ‘Oh poor me rich kids stigma.’ Kids complaining that their mothers didn’t pay attention to them and they live in a mansion,” she explains. “OK, cool, but there’s people who have it way worse than you. You need to step back and have that perspective. It sucks that your parents didn’t pay any attention to you but you have everything at your disposal to change your life… You can take initiative. You have a choice what route you go down.”